In a well organised team performance we beat Ballinamore Sean O’Heslin’s in the Senior Championship Quarter Final in Cloone on Saturday by 1-13 to 0-9 although Ballinamore put up a fine display Annaduff were always in control but the scoreline does not tell the full story as Ballinamore were not seven points the inferior team. We led at the break by 1-6 to 0-2 with the on fire Joe Cox getting a vital goal after 24 minutes, David Duignan and Brendan Guckian were very impressive in this period. Ballinamore were slightly the better team in the second half however Michael, Gerry and Terry’s team ran out deserving winners with Feargal Carroll getting some vital points in the second period. Annaduff Kevin Ludlow, James Cox, Dermot Reynolds, Chris Farrell ( Capt), Matty Cox, David Duignan (0-1), Sean McNabola, Brendan Guckian, David McHugh, Ray Cox (0-3), McCormack, ConorMcLoughlin (0-1), Seamus Mulvihill, Fearghal Carroll (0-4), Joe Cox (1-3),. Subs used : Enda McHugh (0-1), Colm Cox, Gene Cox, Padraic Carroll. 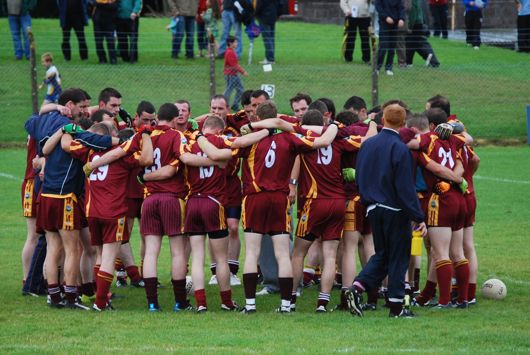 We were beaten by St. Marys in an Intermediate Championship Relegation play/off in Cloone on Sunday by 0-15 to 2-8.This despite the one point defeat was an excellent performance with some superb individual performances. St. Marys led at half time by 0-7 to 1-3 with Noel Ward in great form for Annaduff. The Annaduff goal came in the 30th minutes when after great work by Noel Ward, Derek Cox slotted home. The second half was equally a tight affair. St. Marys led by 0-12 to 1-5 after 42 minutes. In the 46 minutes substitute Cathal Cox brought Annaduff back into the match with a goal. This was followed by a Niall Maxwell point and in the 51st minutes Padraic Carroll put Annaduff into the lead with a superb long range point. However Carrick replied with three points in a row to give them a two point lead. Padraic Carroll who looked back to his best form scored a consolation late pointed free for Annaduff . Annaduff :Barry Daly,Paul Farrell, Gene Cox, Nigel Cox, Ml. Rowley, Martin Faughnan (0-2), Thomas Flanagan, Noel Ward (0-1), John Faughnan, Karl Foley (0-1), Padraic Carroll (Capt)(0-2), Colm Cox, Ciaran McLoughlin, Niall Maxwell ( 0-2), Derek Cox (1-0). Subs used : Gary Bohan, Cathal Cox (1-0), Dean Gill.

The under 14’s reached the 13a side County Final by beating Gortletteragh on Friday evening.

Dont forget Drumsna is the place to be this weekend with the first Anthony Trollope Summer School including the showing of the movie “ Ballycloran “ in the Mobile Cinema on Quay Street on Sunday night at 8.00pm.

Deepest Sympathy is extended to the O’Callaghan,O’Connor and Shanley families on the death of Mrs. Maureen O’Callaghan (nee Shanley). May she rest in Peace