Annaduff were beaten 2-9 to 1-9 by the county champions Glencar/Manor in the Park on Thursday evening. The match was played at championship pace throughout with very little separating the two sides. Both sides got fortunate fist half goals the Annaduff goal came after 3 minutes when the Manor ‘keeper Shane Sweeney misjudged the ball leaving Joe Cox with a simple tap in. Manor goal came on 15 minutes when a high lob from Alan Sweeney ended up in the Annaduff net. The sides were level 1-3 each at the break. Brendan Guckian got Annaduff off to a good start to the second half with a point however two minutes later Fintan McGourty got Glencar/ Manor’s second goal. James Glancy added another point to leave the visitors three point ahead. Annaduff then had their best spell of the match scoring four points in succession from Kenny Bosquette, Joe Cox, Ray Cox and Brendan Guckian.James Glancy and Joe Cox exchanged points before Manor full back the very impressive Adrian O’Flynn got his second point of the match after 55 minutes to put the sides level. James Glancy finished the match with the last three points including two superb frees ( what a pity he had an off day against Longford). On this performance both teams would need to show significant improvement if they are to figure in the later stages of the Championship. Annaduff :Kevin Ludlow, Matty Cox, John Faughnan, Nigel Cox, David Duignan, Dermot Reynolds, David McHugh, Brendan Guckian ( 0-2), Fergal Carroll, Ronan McCormack, Ray Cox ( 0-1),James Cox, Joe Cox (1-3), Kenny Bosquette ( 0-3,)( 0-1 “45”,0-1 free), Alan Cox. Subs used : Conor McLoughlin, Cathal Cox and Michael Rowley.

Congratulations to our Cathaoirleach Dan Reilly who got married to Anne Marie Byrnes in County Galway at the weekend. 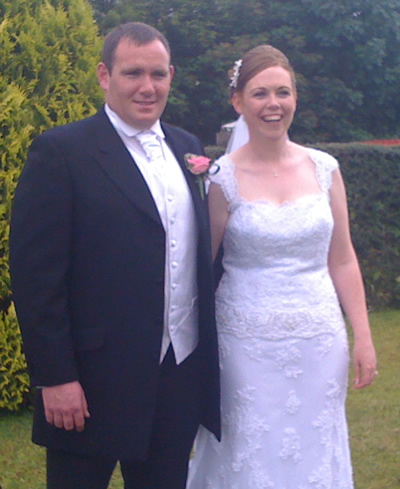 wine was produced for the big day.

Also Congratulations to Pauric Carroll and Maresa Lannon who got married on Friday week.

Allen Gaels beat us in our second Division 1 match of the week by 1-8 to 0-7 in Drumshanbo on Sunday. The Gaels had the advantage of a strong wind in the first half and led by 1-5 to 0-4 at the break . Their goal came after 29 minutes a rather fortunate fisted effort from Brian Mulvey. Annaduffs first half scores came from Ray Cox with three points and Kenny Bosquette. Annaduff played better against the wind than with it and their second half performance was poor. Ray Cox got two more points in the second period with David McHugh and Kenny Bosquette scored a point each. Allen Gaels were the more committed team and deserved their four point winning margin. Annaduff : Kevin Ludlow, Matty Cox, John Faughnan, Nigel Cox, James Cox, David Duignan, Conor McLoughlin, Fergal Carroll, Dermot Reynolds, David McHugh ( 0-1), Kenny Bosquette ( 0-2,0-1from free), Alan Cox, Gerard Reynolds, Cathal Cox, Ray Cox ( 0-5,0-3 from frees).Subs : Gene Cox ( for G. Reynolds) and Colm Cox ( for G. Cox).

Annaduff play Glencar/Manor in under 14 championship in Annaduff at 7pm on this friday 24th. A win would put them in the final. Please come out and support