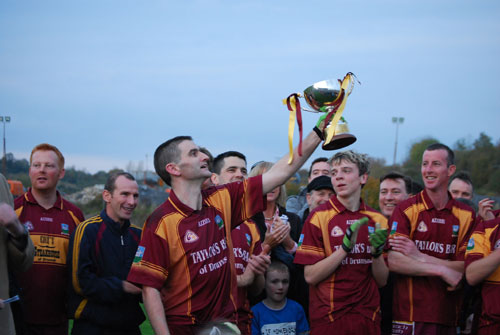 In a very entertaining match , we took the Junior “ B “ title by beating a gallant Allen Gaels by 3-14 to 1-11 in Ballinamore on Saturday evening. The first half was terrible but a superb second half more than made up for this. The Gaels led by 0-6 to 0-4 at the break a lead that on the run of play they probably deserved. Gerry Newton’s half time talk worked wonders as Annaduff were a different team after the break. After good work by Cian Ward, Gus Garvey got a goal after 31 minutes, four minutes later man of the match Ciaran McLoughlin got a second Annaduff goal. Allen Gaels got a fortunate o.g after 41 minutes however three minutes later Enda McHugh scored from the spot after a foul on Seamus Mulvihill. This gave Annaduff a six point lead with sixteen minutes remaining and they easily held to win by nine points.    Annaduff : Jim McCormack, Padraig McGlynn, Thomas Flanagan,Peadar Beirne, Ronan Cox, Martin Faughnan ( Capt), Daniel Duignan, Gerry Newton , Sean Maxwell ( 0-2) , Seamus Mulvihill, Enda McHugh(1-4),Cian Ward , Ciaran McLoughlin ( 1-4),Gus Garvey ( 1-4), Padraig Dunne. Subs used :Derek Cox, Alan Rowley and Matthew Reynolds.

Man of The Match

Well done to Ciaran McLoughlin on getting the “ Man of the Match” award. He was a very worthy winner .

At the draw held in the Brandywell, Dromod , there was no Jackpot winner. The numbers drawn were : 1,9,14 and 24. The € 50 winner was Siobhan Lyons, Dromod. The €25 winners were Evelyn Newton,Fearnaught, John Cox, Antfield,David Stenson, Eslin and Kayla Faughnan, Corduff.. The next draw will be held in McLoughlin’s, Drumsna on Sunday night next with a Jackpot of €4,600.