Despite shooting seventeeen wides we qualified for the final of the Junior “B” Championship by beating Aughavas by 1-10 to 1-07 in Dromod on Sunday. Aughavas dominated the early exchanges and led by four points after 23 minutes however a strong finish to the first half by Annaduff left only one point between the sides at the break Aughavas leading by 0-6 to 0-5. Aughavas got the first goal of the match after forty minutes . Gus Garvey got Annaduffs goal after good work by Ciaran McLoughlin after 44 minutes. A Seamus McBrien point after 45 minutes left the sides level at 1-7 each. Annaduff however finished the stronger scoring the last three points from Ciaran McLoughlin, Gerry Newton and Enda McHugh. 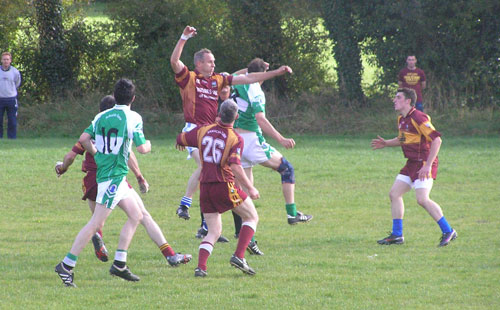 Deepest sympathy is extended to Antoinette McGuinness and Maura Ward on the death of their uncle Fr. Eugene Loughlin. May he rest in Peace.

At the draw held in Taylors of Drumsna , there was no Jackpot winner. The numbers drawn were : 12,16,15 and 16. The € 50 winner was Helen Dowling, Dromod. The €25 winners were Derek Crowe, Dromod, John Joe Reynolds, Dublin,Peadar Beirne, Drumgildra and Adam Maxwell, Furnace. The next draw will be held in the Brandywell, Dromodon Sunday night next with a Jackpot of €4,500.

Congratulations to Bertie Glancy on his marriage to Caroline Grant, Ballyliffen, Co Donegal. We wish Bertie and Caroline many years of happiness.

Congratulations to Oriel Cox on her engagement to Gareth Glancy, Kilmore.

Congratulations to Ray and Clare Ward, Cong on the birth of a baby girl.

In the Leitrim Senior Championship played over the weekend Cian Condon played for Gortletteragh while Fergal Carroll and Dermot Reynolds played for St. Marys.