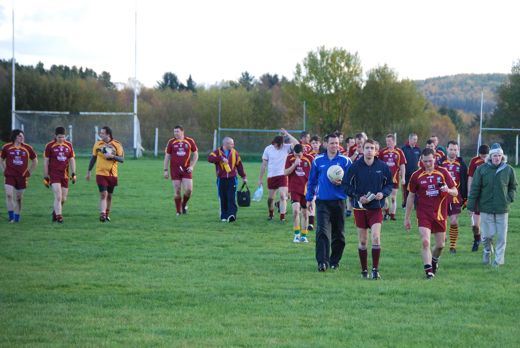 We qualified for the League final with a 1-12 to 1-11 win over Drumreilly in Drumreilly on Sunday. This match had everything great scores, terrible misses , two penalties and nine minutes of injury time. The first half was a vey even affair , Drumreilly led by 0-5 to 0-4 after 25 minutes when Annaduff were awarded a penalty however Enda McHugh usually deadly from the spot sent the ball wide. The first half ended with two goals. Drumreilly’s goal in the 29th minute came from the very impressive James Holohan, almost immediately Annaduff came up the field and Colm Cox buried the ball in the Drumreilly net to leave the score at the break Drumreilly 1-5 to Annaduff’s 1-4.There was never more than a point between the sides for the first 26 minutes of the second half before Annaduff got two points in succession in the 58th and 59th minutes from Enda McHugh and Ray Cox. In the final seconds of normal time Brian Fee scored a Drumreilly point to leave the minimum bet the sides. The drama did not end there as Referee James McCaffrey played 9 minutes of injury time. In the 7th minute of injury time Drumreilly were awarded a penalty, Nigel Maguire opted to put the ball over the bar. Joe Cox finished the scoring with a pointed free to put Annaduff in the final, other results meant Drumreilly retain their Division 1 status. Annaduff : Kevin Ludlow, James Cox, Dermot Reynolds, Chris Farrell ( Capt.), Sean McNabola (0-1), David Duignan, Conor McLoughlin, David McHugh, Padraic Carroll, Ray Cox (0-1), Ronan McCormack,Enda McHugh (0-5,0-3from frees, 0-1 from a 45′),Joe Cox (0-3,0-2 from frees), Cathal Cox (0-1), Colm Cox (1-1).Subs used : Matty Cox, Noel Ward. Match Photos

At the Draw held in Coxs Steakhouse, the numbers drawn were 7,11,13 and 14. There was no Jackpot winner. The € 50 winner was Lisa and Lorraine Guckian, Kiltoghert.The € 25 winners were Michael Heever, Ck-on-Shannon, Gary Cox, Annaduff, Aibhe McGill, Dromod, Emmet Faughnan, Drumsna..The next draw will be held on Sunday night next in Taylor’s with a Jackpot of € 2,100.

Best wishes for a happy retirement are extended to Mel Rowley who retired from the Dept. Of Social Welfare on Thurday last.

Best of luck to our neighbours in the Connacht semi final on Sunday next against Ballinameen.

Congratulations to Nigel and Dara who got married on Saturday last. We wish them many years of happiness.