We got the Championship off to the perfect start in Carrick on Saturday evening as Michael Moyles team beat Bornacoola by 1-9 to 0-11. Annaduff dominated the first half and led at half time by 1-5 to 0-3. The goal came after 26 minutes from the penalty spot by Enda McHugh after a foul on county player Ray Cox.Bornacoola were much improved in the second period and outscored Annaduff by 0-8 to 0-4 in this half however Annaduff held out for a deserved one point winning margin. Bornacoola led by 0-3 to 0-1 after ten minutes. Annaduff dominated from then until half time scoring 1-4 without reply.The Bors were a different team after the break and by the 58th minute had reduced Annaduffs lead to two points. Sean McNabola then got a crucial point to put Annaduff three up with Mark McCluskey finishing the scoring with two pointed frees. Annaduff : Kevin Ludlow,, James Cox, Dermot Reynolds, , Chris Farrell (Capt), Sean McNabola (0-1), David Duignan,ConorMcLoughlin David McHugh, Brendan Guckian ( 0-4,0-3 from frees),Enda McHugh ( 1-2,0-1 from a free and1-0 penalty), Ronan McCormack, Alan Cox (0-1), Ray Cox (0-1) , Feargal Carroll (0-1), Joe Cox. Subs :Matty Cox ( For D.Duignan), Seamus Mulvihill (for J.Cox) and Gene Cox (for Ronan McCormack. 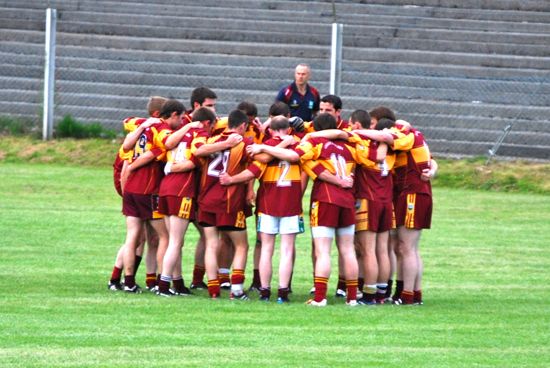 We played Drumkeeran in the Intermediate Champioship in Drumshanbo on Sunday losing by 2-14 to 0-5. Althought we had lots of possession we seldom troubled a much superior Drumkeerin. Playing against the wind we were losing by 1-9 to 0-3 at half time. The second half was a similar story with Drumkeerin winning by fifteen points.Best for Annaduff were Gene Cox, Ml.Rowley, Thomas Flanagan and Martin Faughnan. Annaduff: Jim McCormack,Nigel Cox, Gene Cox,Paul Farrell,Karl Foley, Martin Faughnan, Thomas Flanagan, Noel Ward, Ml. Rowley (0-1),Colm Cox, Cathal Cox (0-1),Micheal O’Dowd, Ciaran McLoughlin (0-3,0-3 from frees), Padraic Carroll ( Captain ), Marcus Guckian.Subs used : Derek Cox, Ronan Cox, Johnny O’Connor, Dan O’Reilly.

Best of luck to former player Barry Cox who takes part in the Big Money Game on R.T.E1 on Saturday.

Well done to the under 14’s who beat Allen Gaels in round 3 of the Championship.

Our thanks to Michael and Marie McGuinness of the Brandywell for their Sponsorship of the Race Night. Thanks to John Reynolds for his organisation on the night. Thanks to all who bought Horses, Jockeys or Trainers. A special thanks to the Tote Operators Hillary, Mary, Emer and Andrew.