We played Drumreilly in Cloone in round 2 of the Senior Championship on Saturday winning by 1-12 to 1-11.The scoreline shows Annaduff winning by a point but with twelve minutes remaining in this match Drumreilly led by 1-10 to 0-6 and Annaduff were almost out of the Championship however a storming finish and some good managerial decisions won the match for Annaduff. The first half was evenly contested with Drumreilly’s Francis Holohan finishing the half with a well taken goal to leave them leading at the break by 1-6 to 0-4.In the first period Kevin Ludlow made a superb goal bound save which may well have kept us in the Champioship. Annaduff shot twelve wides in the first half. A very impressive Drumreilly dominated the the opening period of the second half leading by seven points after 18 minutes. Substitute Ronan McCormack started the Annaduff revival with a point followed by points from Joe Cox and Fearghal Carroll. On 24 minutes Declan Maxwell put Drumreilly five ahead with a point.Annaduff got the last four scores, points from Ray Cox, Enda McHugh and Joe Cox and a well taken goal from Enda McHughwho was excellent in the last ten minutes. It was hard luck on Drumreilly who put up a superb performance. This result means Annaduff reach the last eight and also retain their Senior Championship status. Annaduff: Kevin Ludlow, James Cox, Dermot Reynolds, Chris Farrell, Matty Cox, Conor McLoughlin, Sean McNabola (0-1),Brendan Guckian, David McHugh, Enda McHugh( 1-3),Fearghal Carroll (0-1),Colm Cox, Joe Cox ( 0-3),Ray Cox( 0-3), Alan Cox.Subs used : Ronan McCormack (0-1), Cathal Cox, David Duignan, Seamus Mulvihill. 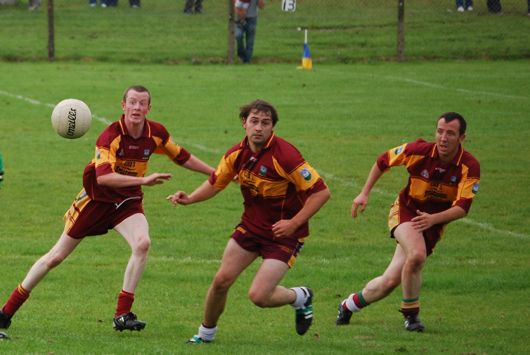 We were beaten by Allen Gaels in the Junior Championship in Leitrim on Sunday by 0-13 to 1-3. The first half was evenly contested with the teams level at the break on a scoreline of Annaduff 1-2 to Allen Gaels 0-5.Matthew Reynolds got Annaduff off to an ideal start with a fisted goal after 6 minutes. John Faughnan landed a long range point a minute later . Allen Gaels then came more into the game scoring three unanswered points . Niall Maxwell got an Annaduff point after 28 minutes. Allen Gaels got two more points before the break. It was all Allen Gaels in the second half as they outscored Annaduff by 0-8 to 0-1. Niall Maxwell got Annaduff’s pointin the 48th minute. Nonetheless the was a good Annaduff performance against a team who were Intermediate last year. Annaduff play Drumkeerin already beaten by Allen Gaels in round 2.Annaduff :Barry Daly (Capt)Karl McLoughlin,, Dan O’Reilly, Gary Bohan, Dean Gill, Mark Rowley, Dylan Keane, John Faughnan (0-1), Daniel Duignan, Matthew Reynolds (1-0), James Faughnan, Gary Egan, Niall Maxwell (0-2), Liam Ward, Johnny O’Connor.Subs used : Colin McNabola, Stephen Murray, Karl McNabola.

There will be an important Club Meeting on Wednesday August 11th at 9.30pm sharp.