Thanks to Niall Flynn of the Shannon Key West Hotel for all his help and refreshments for our Texas Hold’em on Good Friday. The event was a great success. 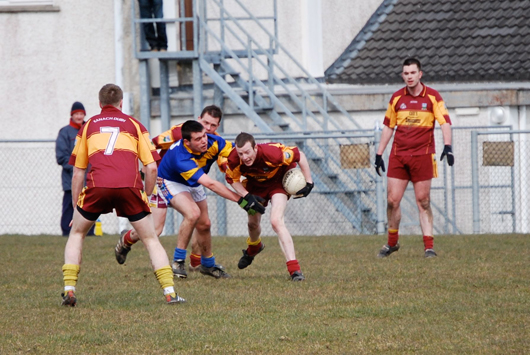 We beat Aughawillan by 0-13 to 0-6 with an impressive display in the Park on Sunday last. In a evenly contested first half Annaduff led by 0-5 to 0-4 at the break. All Aughawillans points came from Morgan Quinn with three frees and one point from play while Annaduffs scorers were Ray Cox back to near his best form with two points, Matty Cox and Sean McNabola scored a point each with Brendan Guckian getting the final point of the half with a well taken long range free. Annaduff were much more dominant in the second half confining a young Aughawillan team to just one point in this period. Annaduff scored eight second half points Ray Cox got three points in this period one a superb effort other points came from the impressive Sean McNabola with two and points from Brendan Guckian, Cathal Cox and Enda McHugh. Manager Michael Moylan and his management team of Gerry and Terry will be happy with this display while there is room for improvement this was a good all round performance. Annaduff : Kevin Ludlow, James Cox, Conor McLoughlin, Chris Farrell, Matty Cox (0-1), David Duignan, Dermot Reynolds, Feargal Carroll, Brendan Guckian ( 0-2,0-2 from frees), Enda McHugh ( 0-1), Ronan McCormack, David McHugh, Ray Cox (0-5), Cathal Cox (0-1), Sean McNabola (0-3). Subs used : Joe Cox, Nigel Cox, Ciaran McLoughlin.

Deepest Sympathy is extended to the Leonard family on the death of Mrs. Annie Leonard. May she rest in Peace.

We played Fenagh St. Caillians first team in Fenagh on Saturday. losing by 1-10 to 0-4. Fenagh led by 0-5 to 0-0 after 13 minutes however for the remainder of the half Annaduff came more into the game with two points from half back Sean McNabola and another from Ronan McCormack to leave the score at the break Fenagh 0-7 to Annaduff’s 0-3. Fenagh controlled the second half despite Annaduff hitting the woodwork on three occassions. We only scored one point in the second half from Colm Cox after 55 minutes. Fenagh managed by Peter Bolger from Rooskey ran out deserving winners by nine points. Annaduff :Barry Daly, Nigel Cox, Chris Farrell, Noel Ward, Sean McNabola (0-2), Ml. Rowley, Ronan Cox, Cathal Cox, Aaron O’Connor, Colm Cox 90-1), Ronan McCormack (0-1), Gerard Reynolds, Ciaran McLoughlin, Joe Cox, Niall Maxwell. Subs : Marcus Guckian ( for C.McLoughlin), Dan Reilly ( for M. Rowley), Dean Gill ( for N. Maxwell), Alan Rowley ( C. Farrell injured), Dylan Kane ( for N.Ward).

Our under 14’s beat Carrigallen in the League on Saturday.

Best wishes for a speedy recovery are extended to Thomas Flanagan who broke his collar bone versus Glencar/Manor.